We began to recognize each other: those who were loyal to religion and the king took up positions to the right of the chair so as to avoid the shouts, oaths, and indecencies that enjoyed free rein in the opposing camp.

First, you have to get left and right right.

Right is a reference to authoritarian or top-down forms of government. Left is a reference to more egalitarian bottom-up forms of government. Right is not necessarily odious, but power does tend to corrupt. It’s fair to say that the further you go on the right-wing, the better the chance things can get downright ugly. Left is no guarantee of panacea as egalitarian popular rule may or may not get the necessary done.

Here it is laid out properly. You will note easily that this layout confounds the usual left-right positioning, but you will also see that it has much more explanatory value. 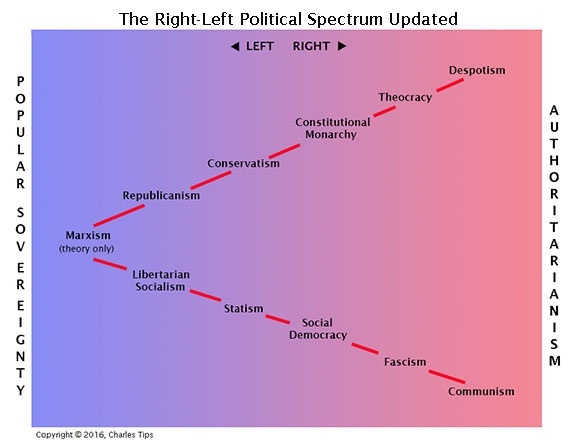 From top to bottom:

Despotism: In 5th-century BC Greece, a despot was a head of household. It came to include such a person who also held slaves. Finally, it was applied to the satraps of Persia and other Asian rulers who treated their subjects as slaves. Here, it is a reference to all strongman forms of government with power vested in one or a small number of persons who may hold life-and-death power over their subjects.

Theocracy: Rule by a priesthood, a consecrated elite, according to religious law and edict constitutes a theocracy.

Constitutional Monarchy: Pure monarchies fall under Despotism. The addition of a constitution and some form of popular representation moves monarchy, or rule by an hereditary elite, more to the left.

Conservatism: In political science, conservative refers to a moderate supporter of monarchy, that is, Tories. The term is also used in its general sense… one who wishes to conserve something. In the US that’s a reference to those who wish to conserve our liberal heritage, usually with some degree of Judeo-Christian morality added.

Republicanism: Republic simply means a nation without hereditary rule. Republican connotes more than that. It is constitutional government with popular sovereignty. That is, some or all of the population enjoy full status as citizens (not in the birth sense but the empowered sense), fully able to see to their affairs and to have input into the functioning of the public sphere… in Lincoln’s felicitous phrase, “government of the people, by the people, for the people.

Marxism: The original left-right scale (see quote at top) pitted stuffy monarchists against rowdy republicans, later referred to as liberals. Three generations later, Karl Marx proposed a political vision that would be radically egalitarian (all class distinctions dissolved) and radically non-authoritarian (following a temporary dictatorship of the proletariat, little more than anarchy). This outlook was (reasonably) accorded a position to the left of liberalism or republicanism. Marx’s scheme, alas, was so impractical that it has never been implemented.

Libertarian Socialism: Close to Marx’s vision but not always derived from his concept are the various left socialisms, including libertarian socialism and democratic socialism. This is the anti-authoritarian socialist outlook that Hitler and others branded “Jewish socialism.” It has had limited but persistent appeal, and, like despotism and democratic republics, dates back to antiquity.

Statism: Otto von Bismarck, who united and became chancellor of Germany in 1871, was a thoroughgoing monarchist. However, in order to accomplish the herculean tasks he set out to complete, he all-but-single-handedly created the modern paternalistic welfare state. He did so, robbing ideas from both the liberals and the social democrats, in order to thwart their appeal to the German people and so preserve the Hohenzollern monarchy.

Social Democracy: As originally conceived with considerable input from Karl Marx, social democracy was to be the route to communism/socialism in those western nations that could get there parliamentarily rather than by means of revolution. It began as left socialism but was soon less in thrall to Marx and more with Bismarck. In his scathing Critique of the Gotha Programme of 1875, Marx denounced the German social democrats as having become a permanent dictatorship of the bourgeoisie all too willing to rely on state power, both of which, he predicted, would prevent a true egalitarian worker’s paradise from ever coming into being. A century and a half later, that assessment remains correct.

Fascism: Fascism was socialism updated to the modern era. The nationalism that was in the air before and after World War I replaced the stale concept of class consciousness as the galvanizing force. Dirigisme, or state direction of industry, seemed more expedient than nationalizing industry. After all, with the war over it was time to rearm and the industrialists knew a thing or two. If only we could get all oars in the water and pulling together, what power could be enjoyed! How could that not produce the best of all possible worlds?

Communism: Communism, Marx’s original idea, the twin side of socialism, was the last to be attempted, and those attempts, particularly Leninism and Maoism were of a form nothing like Marx’s vision. Communism came to stand for elite rule over abject and immiserated peoples by means of heavy-handed state power.

World War II is best understood at a high level as a conflict among the last three categories—the emerging socialisms. Joseph Stalin decreed that not only were the fascists right-wing but so were all non-Marxist-Leninist socialisms, and all state organs and media were to refer to them that way. That applied to Norman Thomas and the Socialist Party of America as well as to then-president Franklin Roosevelt. This caused Roosevelt to quip that if fascism is right-wing, it must be aligned with the Republican Party, an absurdity that nevertheless took hold in some minds.

Fascism did not survive WWII. Communism remained an appealing model through the Cold War and began its collapse later, during the administrations of Reagan and Thatcher. Social democracy, or “left” progressivism in the US, is the last bastion for socialism, yet, social democracies around the world are retrenching to incorporate more of the free-enterprise liberal economics native to republicanism. But, though social democracy’s lineage traces directly back to Marx, it is difficult to defend as left socialism as Marx’s attack that it had become authoritarian and non-egalitarian remains true to this day. Interestingly, Bernie Sanders’ brand of left socialism seemed to have appeal to young Democrats.

Lots of political questions in the air. Hope you find my chart useful in getting a picture of how politics really works.